Netsync, with Nokia and Cradlepoint eliminate the digital divide in Fresno California

Fresno, located in central California, is home to more than a half-million people. It’s the economic hub of the San Joaquin Valley. Fresno Unified School District is the third-largest district in California, with 94 schools and 70,000 students. It has a high degree of poverty, with 89% of students eligible for free or reduced-cost lunches, and yet its student population is rich in diversity, strengths, and potential. The district responded to COVID by shifting to remote learning and one-to-one laptops for students. This depended on cellular hotspots for students to connect and learn beyond the school campus, but it came with a challenge.

COVID revealed the digital divide within Fresno USD, showing gaps in access to quality, affordable internet. Hotspots did not work well in poorer areas of Fresno because there were fewer cell towers, and long term, the data plans for commercial cellular hotspots are financially unsustainable.

A Solution to bridge the digital divide

Netsync, with Nokia, a top-tier manufacturer, provided a Private LTE solution that was effective and more important future-proof. “Our goal was for every student to have access to broadband connectivity supporting their education at home and throughout the community,” said Jim Connor, Director of Channel Partnerships at Nokia. The initial phase of the LTE deployment covers a geographic region with over 25 schools and can support around ten thousand students. This Nokia Digital Automation Cloud for private LTE network allows only students to connect to the network with district-issued CBRS spectrum SAS control SMC-411A hotspots.

Netsync’s initial phase required deploying Private LTE radio towers to schools. Each school site can support up to 360 concurrent users, and the LTE signal reaches half a mile to 1-mile. Bandwidth goes up to 100Mbps, depending upon the topography and the number of concurrent users. Fresno USD developed an app to track students’ Internet access when students are using their district-issued laptops.

Modern learning occurs both in and beyond the school building digital curriculum. The shift to one-to-one laptops along with private LTE hotspots better support all students having pathways to modern learning and work

Private LTE is less expensive than paying for a cellular hotspot from a commercial carrier.

Netsync and Fresno USD intend to build a second phase of the network adding nearly 30 sites. This private LTE network is a more affordable solution to deliver services to students in their homes. Students become better prepared to participate in society as employees and entrepreneurs as learners and citizens. 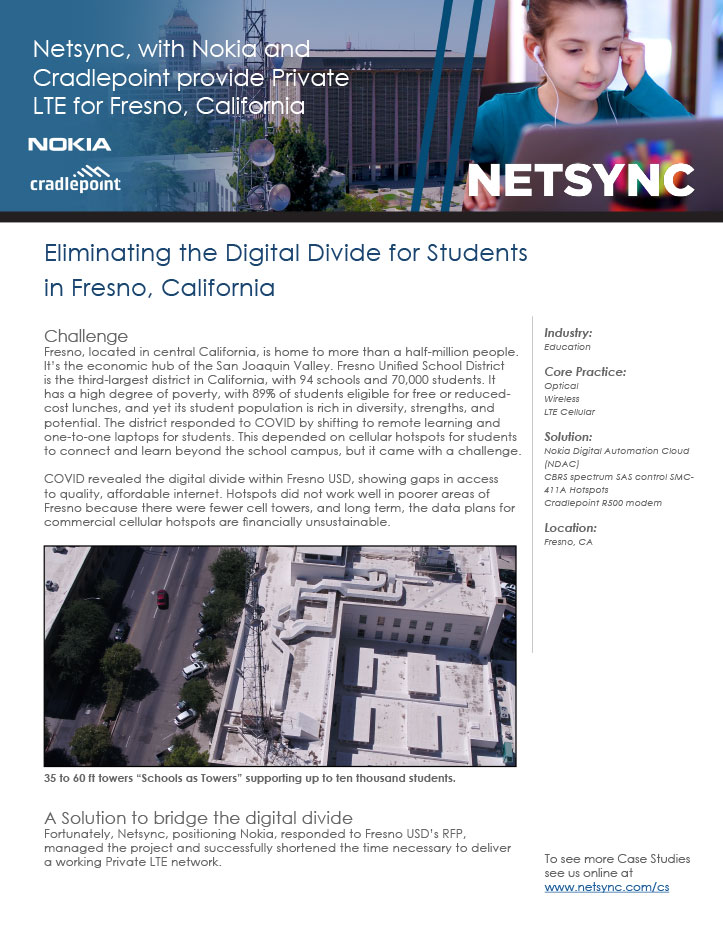 How Can We Connect You?